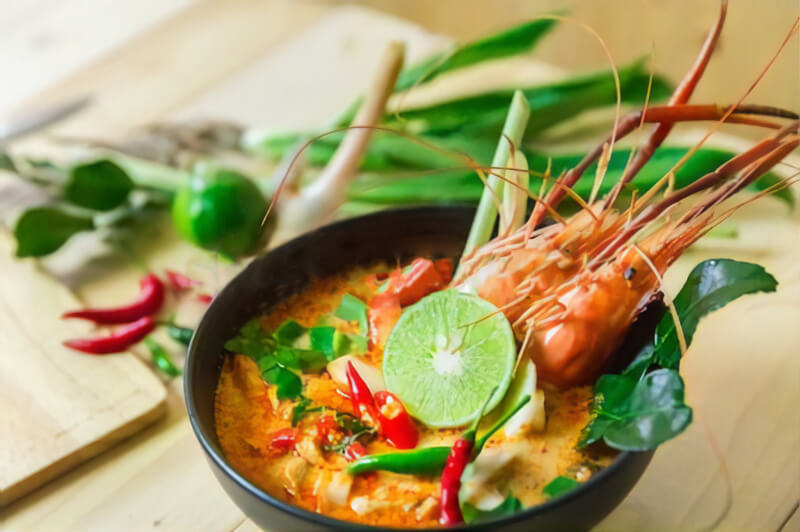 History and culture of thai cuisine

Thai cuisine was largely influenced by two factors: climate and culture, although the country's history, invasion and emigration play an important role in this respect. The influence of Burma, China and Cambodia also had a significant impact. Every year, two or three harvests are collected in this area, and many different vegetables are grown here throughout the year. Most likely, it is the abundance that explains the phenomenon - the lack of the word "hunger" in Thais language. The religion practiced by the majority of the local population is Buddhism, which does not practice dietary restrictions. Thai people in their kitchen use a large amount of fish, all kinds of meat, as well as a large amount of fruits and vegetables.

Thai people are sensitive to their culture and appreciate tradition. National dishes are their pride and love to enjoy them with guests. The canals and streets of Thai cities are equipped with boats and bicycles, prams and trays selling various snacks. Holidays and parties are very much appreciated in Thailand. During the bustling and noisy festivals, a national, carefully prepared dishes are sure to serve as a sign of respect for traditions and customs. Snacks, whiskeys or Thai beers as well as exotic fruits are constantly offered to guests.

Ordinary daily meals are directly dependent on the weather, harvest, season and whims of rainy weather. Thai people treat food seriously, preferring only fresh ingredients with the most delicate structure and taste. One of the main products is rice. It is both a main dish and appetizer, also served as a dessert.

In different regions, Thai cuisine varies depending on the availability of certain products. In Thai cuisine, banana leaves are used as a baking container. They give the dish a delicate, specific taste. Black Chinese mushrooms is one of the products of this cuisine, which also has a special and original flavor. Thai basil, unlike the European one, is darker and has a richer taste. Brown rice in the local kitchen is added to the dishes, as a rule, for consistency.

Thai cuisine, like Thai architecture, is deeply eclectic. It combines the sharp fire of Indian spices, refinement of dishes of the French royal court, unchanging quality of Chinese cuisine and traditions brought by settlers and tribes from Malaysia, Burma and Laos. But if architecture is called frozen music, then Thai dishes are music that takes the form of food.

Thai cuisine is healthy, tasty and at the same time original. Its history begins long before Thailand's existence as a separate state. Thai cuisine is derived from mountain settlements in southwestern China, considered the birthplace of Thai tribes. In the sixth and twelfth centuries these tribes moved to the southern lands, where currently there are such countries as Thailand, Laos and Myanmar.

Initially, the peoples of Southeast Asia ate vegetables, meat, fish, seafood and rice. Then the Thai countries were strongly influenced by other countries of the world. For example, in the 17th century, sweets and chilis from Portugal were brought, and in the eighteenth century people from Southeast Asia learned about Indian curries and various spicy spices from China. Therefore, to get a more spicy taste, fragrant spices have been added to Thai dishes. The development of Thai cuisine was most influenced by China and India. And there is evidence for that. Some dishes (such as curry with rice) come from Indian cuisine with little or no change. And the spicy Sichuan sauces from China, which are famous for their huge amount of spices, have their counterparts in Thai cuisine.

In addition, a mix of various curry spices, as well as curry powder in combination with pepper, cinnamon and coriander, are actively used in Thai cuisine to this day. Thai people also borrowed many dishes prepared from goulash from the Indians. Directions of Thai cuisine The characteristics of Thai cuisine depend on the regional location of a given area of Thailand.

The creation of the basics of Thai cooking art took place over several centuries of the Siamese state. Due to the significant influence of India in the Indochina region, most of Thai cuisine was borrowed from India. The only difference was that during cooking Indian dishes were commonly used clarified butter (ghee), milk and spices, and in Thai cuisine these ingredients were replaced with coconut oil, coconut milk and fresh herbs, which include, among others. lemon grass, kalgan or basil. It should be noted that one of the main ingredients of Thai cuisine - chili - was introduced to Thailand by the Portuguese missionaries in the seventeenth century.

Traditionally, the nuances of Thai cuisine vary depending on the regional origin. In Thailand, there are usually four culinary directions: northern, central, eastern and southern. The northern style is characterized by dishes made of fresh river fish, pork or poultry meat. Particularly popular among the residents of the North are Thai pork sausages and soy noodles in a soup made of coconut milk. The proximity of Laos had a significant impact on the cuisine of eastern Thailand - it is believed, for example, that the Thai showcase of oriental cuisine - a spicy papaya salad called som tum - is a national Lao dish. A very similar salad is produced in Cambodia but it is different there. The culinary traditions of central Thailand as a whole are quite diverse, and the cuisine of the southern lands is distinguished by a mix of Thai, Chinese and Malay culinary heritage.

An undeniable advantage of Thai cuisine is the abundance of seafood dishes: mollusks, fish, shrimps and crabs. Do not forget that Thailand is in such a natural climate zone, where the freshest fruits are available throughout the year. Therefore, all kinds of desserts, fruit salads, bananas in cake and yellow mango ice cream will always reign on the tables of this kitchen. 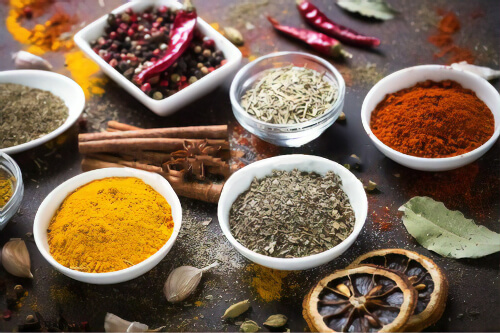 The variety of fresh herbs, used as ingredients in the preparation of dishes, makes Thai cuisine not only tasty but also useful. In the amazing world of Thai cuisine, every dish is the most important.
All because Thai food, in addition to being tasty and healthy, is also extremely beautiful.

Thai culinary formula can be conditionally reduced to two words - flame and ice. Thai people find a special culinary pleasure in spicy food. For Thailand, "not spicy" automatically means tasteless. The spice palette of Thai cuisine is varied and has many shades but the main trend is the fact that the dishes are spicy. The burning taste of Thai dishes brings an abundant portion of hot spices. A Thai meal is usually topped up with icy beverages or a dessert made of ice crumb with fruit syrup.

In Eastern philosophy, balance in the world and in the human body is based on a harmonious combination of opposites that are incompatible at first glance. In such a cultural context, it is quite logical to combine such flavors in Thai cuisine. Many also see the relationship between the number of spices and a slim figure. Indeed, hot peppers, ginger and other spices activate metabolic processes in the body. However, it is better to approach this theory with slight skepticism, in the spirit of a moderate oriental mentality.

Thai people eat spicy food from generation to generation. Their digestive system is genetically adapted to such food. Problems with the stomach are one of many symptoms of eating excessive amounts of spicy Thai dishes. Therefore, most Thai restaurants abroad consider this function and automatically reduce the content of spices in dishes.

To fall in love with Thai cuisine, you do not have to be in Thailand for a very long time. Just try a few dishes, and it will be clear at once that the taste and smell of lemongrass, cardamom, coconut milk and chili peppers will be remembered for a long time, and the taste buds will persistently insist on calming them down at least once in a while. life.