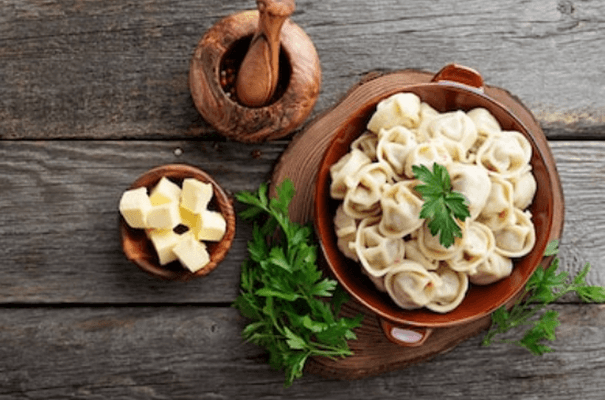 It should be noted and emphasized that the ancient, native Russian cuisine was not very diverse. For centuries the dishes were simple and monotonous. Although the names of the dishes were very many, they differed mainly in one or two components. Isolating some products from others has led to the simplification of the menu, but on the other hand, it caused the creation of many original dishes, which today became the hallmark of Russian cuisine.

Russian cuisine is one of the most authentic in the world. Both the severity of the climate and the richness of folk traditions left its mark on it. This cuisine was not born under the arches of palaces, but in the homes of ordinary, poor people who needed to feed a large family. Therefore, traditional Russian dishes are usually nutritious and made of the cheapest and simplest ingredients. Despite this, the cuisine of this country can not be called poor and monotonous because its taste combinations can surprise even the most demanding gourmets.

Russia is a multinational country, you can try here various, sometimes very exotic dishes of many nationalities. However, traditional Russian cuisine can be found throughout the country. Russian cuisine is very diverse and original in taste. It has been developing for many centuries, enriched by borrowing from the culinary traditions of other nations. Interestingly, dishes and recipes vary greatly depending on the region: for example, the kitchen of northern Russia is very different from the cuisine of the Volga region, and the Siberian cuisine - from dishes hosted on tables in Moscow. The richness of the national Russian cuisine is undeniable.

Russian cuisine is extremely tasty and full of surprising diversity of dishes and exceptional gastronomy connections. It is not without reason that Jean Anthelm Brillat-Savarin, the famous French gourmet and author of the book "Physiology of taste", believed that Russian cuisine is one of the three best cuisines in the world. For centuries it has been an integral part of culture and a determinant of the historical authenticity of the Russian nation. Let's remember about traditional Russian dishes and the unusual tradition of cooking, which has survived to this day.

Russian dishes have never been particularly complicated, all are easy to prepare but at the same time tasty and filling. Traditional Russian dishes are characterized by high energy value and contain a lot of fat. This is due to the harsh climate that determines the demand for high-energy nutrients. Originally in Russia, the food was cooked in an oven where the special temperature was maintained so that the dishes were tasty and properly prepared.

From ancient times until today, Russian cuisine has come a long way: for the first time rye bread appeared, without which you can not imagine a single Russian meal, then bread and flour products - pancakes, cakes, donuts - were placed on the tables. still present in Russian cuisine. However, it not only makes Russian cuisine delicious and special.

Characteristics of flavors of Russian cuisine 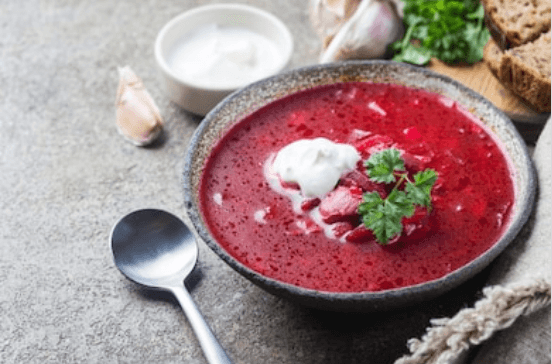 Russian cuisine is probably one of the most "colorful" cuisines in the world. We find here delicious borscht, pancakes with caviar, fish and mushrooms and delicious cakes with various sweet and salty fillings. A traditional Russian dinner consists of three dishes: a hot soup, a meat or fish soup with the addition of cereal flakes or potatoes and a sweet drink - a fruit drink, fruit juice or compote. It is impossible to imagine Russian cuisine without bread and flour products, especially pastries with minced meat, mushrooms and boiled eggs. Russian cooks cook pork, beef, lamb and other poultry perfectly, and fish are able to smoke, dry and salivate, creating truly special dishes.

Russian snacks look and smell very tasty and stimulate the appetite. Some are very spicy. They are served with a variety of spices and decorations, such as horseradish, mayonnaise, kvass, garlic, spicy tomato sauces, etc., which purpose is to give and emphasize the original taste of preapred dishes. Some domestic snacks: Russian vinaigrette, jelly, salted herring.

The king of Russian cuisine is definitely the soup. In Russian, the word "soup" was adopted rather late. Typical Russian soups include: shchi (sauerkraut soup), cucumber soup (soup with marinated cucumbers), okroshka (served cold with the addition of cream), solyanka (soup with vegetables, cucumbers, olives and pieces of meat) and fish soup.

In Russian cuisine, bread and baking have always been particularly important. Guests were greeted with bread and salt. No less important were cakes - a symbol of wealth and prosperity. In both everyday and celebratory food, bread plays the most important role. The Russians say: "bread is the head of everything." The Russian bread was very honored: according to the old custom, dropped bread should be lifted, wiped, kissed and asked for forgiveness for negligence. The most popular is Russian rye bread, baked with various food additives (spices, raisins).

Groats, like soups, is something that Russian cuisine can not do without. The Russians, especially in childhood, always eat porridge for breakfast because it is healthy and nutritious. Semolina, pearl barley, oatmeal, buckwheat and several dozen other varieties are served in Russian homes.

In the Russian cuisine, fish dishes are among the most favorite and the most eaten. The rivers, lakes and seas near which the Russians settled always gave them tasty and inexpensive food. In addition to freshwater fish, the ancestors also ate sea fish such as cod. However, sturgeon, salmon and other specimens of this species were especially valuable. Mostly fish is served with potatoes and boiled buckwheat.

Each kitchen can be divided into two groups of dishes: official dishes and daily meals. The same applies to Russian cuisine. Preparing formal dishes takes a lot of time, often contain many different foods. In the end, these recipes are exclusively Russian by name, such as "pork in a Russian sauce", "Russian meatballs" etc. In contrast, everyday meals are prepared from ordinary products in a very short time. They reflect the true Russian cuisine and give a real impression of the taste and aroma of Russian dishes.

To prepare delicious dishes from the vegetables themselves, it is necessary to use different spices. Russians use fennel, parsley, celery, and later began to use spices from other countries, such as pepper, cinnamon, cardamom, cloves. Almost all dishes contain onions. Russians also eat a lot of fish, berries and mushrooms.

Russian cuisine is a delicious soup, a variety of cereals, jams, cucumbers, fragrant cakes. Taking the first place in the world in terms of territory, Russia absorbed elements of the culture of many nations, including culinary traditions. An area with different geographic and climatic features contributed to the diversity of the menu. Both meat-eaters and vegetarians will find a dish in Russian cuisine.

Russian national cuisine is extremely original and interesting. During its centuries of existence, it absorbed and creatively transformed the culinary traditions of many generations and peoples: from the Tartars to the French.The shape of the national cuisine was influenced by everything: the climate, way of life of the population, politics and religion. This may sound strange but even wars led by Russia changed its culinary traditions. After passing the thousand-year development path, Russian cuisine experienced several important historical periods, each of which enriched it in its own way. All this makes the popularity of Russian cuisine all over the world extremely wide, enjoying the taste buds of tourists from around the world.